Vanilla has a reputation for being 'basic' or 'boring'. But the truth is Vanilla is anything but! Not only is it a deep and complex flavor in its own right, but vanilla cake is a solid foundation for so many amazing, delicious cakes and desserts.

French vanilla cake is a classic choice for birthday cakes and for wedding cake as it's such an amazing flavor that most people enjoy. It's also so versatile and can be mixed with so many different frostings and fillings.

This French vanilla cake is my go-to vanilla cake recipe and the base of many of my most popular posts, including my Vanilla Custard Cake and my Mango Cupcakes. It uses the reverse creaming method which makes for an incredibly soft and luxurious texture. Not only is the flavor incredible, but the texture is out of this world - when you put your fork into it, the slice cuts just like butter! Welcome to your new favorite perfect vanilla cake recipe!

This French vanilla cake recipe uses the reverse creaming method, which means combining all the dry ingredients with the butter first, rather than creaming the butter with the sugar. It sounds crazy at first but they are super simple steps that will give you a perfect, decadent french vanilla cake.

What is French Vanilla?

Many people assume that the thing that makes it 'French' vanilla is the origin of the vanilla that is used in the recipe, such as with 'Tahitian vanilla' or 'Madagascan vanilla. - that's actually incorrect. Rather than it being about a specific French vanilla extract, the flavor of 'French Vanilla' actually originated with ice cream and referenced the French method of making ice cream which was made with a custard base (i.e. egg yolks and milk/cream) That delicious, custardy flavor is what is known as French Vanilla. When referring to cake, it means a vanilla cake that uses both egg whites and egg yolks in the recipe, as opposed to your typical white cake recipe which will only use egg whites.

What kind of Frosting goes with French Vanilla Cake?

The fun thing about vanilla cake is that basically, any flavor goes with it! For a classic vanilla flavor, you can stick with vanilla buttercream, but even then there are so many options to choose from! I used Russian buttercream for the cake in the photographs.

American Buttercream: A very sweet and rich and a little thicker than other buttercreams. It is the classic frosting you are probably used to from store-bought cakes.

Italian Meringue Buttercream: A much more sophisticated frosting that is silky smooth and luxurious and a lot less sweet than American buttercream. It is a little longer and more complicated to make though.

Any of these buttercreams can be mixed with other ingredients to flavor them and create a world of different flavor combinations. For example, I recently mixed Russian Buttercream with raspberry coulis to create the frosting on these delicious Raspberry Cupcakes.

Here are some other posts with more of my favorite frostings you can try with this cake:

How to Decorate a French Vanilla Cake

How you choose to decorate your cake is entirely up to you. But here's an idea of how I decorated mine.

Top Tip: For extra smooth frosting, run the spatula or bench scraper under hot water for a few seconds to make it warm, then dry quickly with a paper towel - do this in between swipes of the frosting.

Ways to Use this French Vanilla Cake Recipe

As I mentioned before, this french vanilla cake recipe is super versatile.

Layer Cakes - You can use it to make any number of layer cakes such as my Vanilla Custard Cake or Chocolate German Layer Cake.

Cupcakes - You can also use this exact same recipe to make cupcakes, such as my Mango Cupcakes. The recipe as is will make about 24 cupcakes.

Bundt Cake - The recipe will work for a bundt cake, but it is a very fragile cake so make sure you are very gentle when removing it from the bundt pan as you don't want it to break! Also. make sure to thoroughly grease your bundt pan.

The baked, unfrosted vanilla cakes can be stored wrapped in plastic wrap and in an airtight container for 3 - 5 days.

If your frosting does not need to be refrigerated, it's best to store it in an airtight container at room temperature. 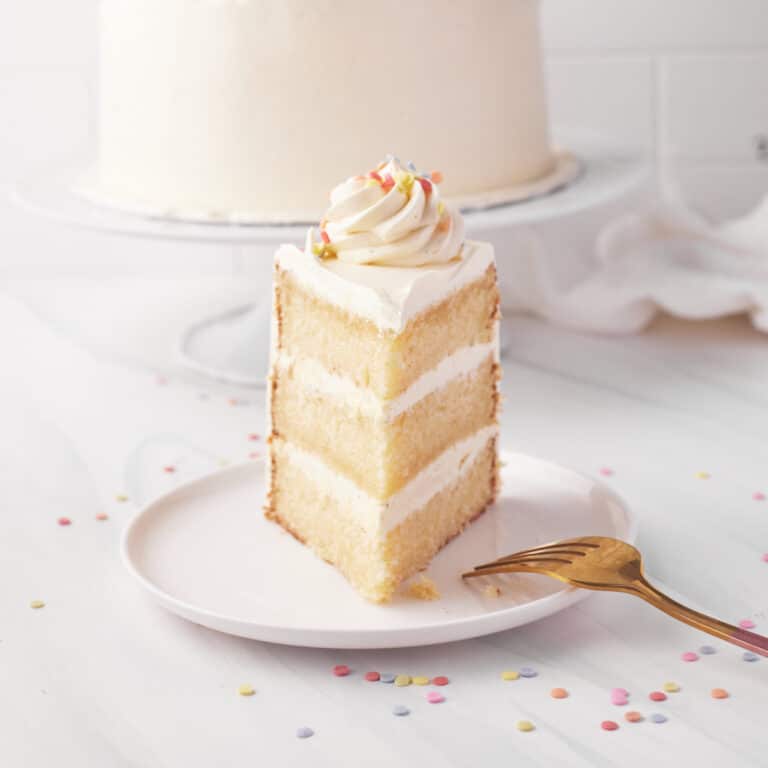 It's crucial that the milk, eggs, and butter are at room temperature before beginning otherwise the ingredients will not incorporate properly.  I tend to remove my ingredients from the fridge about 1 hour before beginning to bake - but it will vary depending on the climate where you live.  Note: For the photographed cake, I used a DOUBLE BATCH of this recipe to make an extra tall cake. I split the recipe into quarters and used three of those quarters to make cake layers, then used the remaining quarter for cupcakes.  A single batch of this recipe can still have multiple layers depending on how you cut them, it just won't be quite as tall.

What is the Reverse Creaming Method?