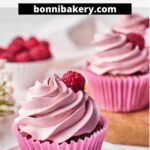 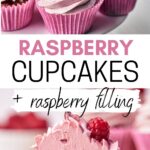 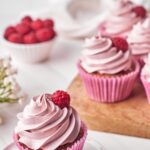 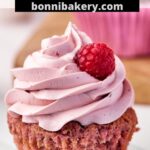 These raspberry cupcakes are packed full of so much raspberry flavor with raspberry cake, raspberry filling, AND raspberry frosting. And all the flavor comes from real raspberries!

You honestly will not believe how strongly these taste of raspberries! And there is no artificial flavoring or coloring, all the flavor is all-natural and comes from real raspberries. The tangy raspberry comes through in every bite and really tickles your taste buds with sweet and tart flavors. The texture of the cupcakes is wonderfully soft with a super moist crumb, and the raspberry Russian buttercream is incredibly silky and smooth.

These fresh raspberry cupcakes are a super cute spring bake, or great for something like valentine’s day because of their naturally pretty pink color. If you love raspberries, you might also love my Lemon and Raspberry Bundt Cake or my Raspberry Meringue Pie.

How to make the Raspberry Coulis

There are basically three things we need to do for the raspberry coulis, puree the raspberries, cook them and then sieve them. If I am using frozen raspberries I like to cook them first, simply for ease so I don't have to defrost them first. The recipe works either way so you can do whatever you prefer.

If you are using frozen raspberries:

If you are using fresh raspberries:

Allow your raspberry coulis to cool completely before using - I like to make it the night before.

The finished result will be kind of the consistency of ketchup (but a lot tastier!)

Note: You can also add a little squeeze of lemon juice to the puree to enhance the flavor if you like, but this is entirely optional.

How to make the Raspberry Cupcakes

This raspberry cupcake recipe is an adaption of my vanilla cupcakes, but with the addition of the fresh raspberry puree to bring in the flavor.

How to make the Raspberry Russian Buttercream

How to assemble Raspberry Filled Cupcakes

Flavor combinations - Raspberries go with so many flavors, try making:

Raspberry jam filling - if you'd like a thicker or sweeter filling, you could fill the center with raspberry jam instead.

Alternative frosting - If you don't want to make Russian buttercream frosting, you could try whipped cream instead with mashed raspberries and a little powdered sugar mixed through it.

These cupcakes are best stored in an airtight container on a base of kitchen towel to soak up any condensation. They will keep for 3 days like this.

For the Raspberry Coulis

For the Raspberry Cupcakes

For the Raspberry Buttercream

*All-purpose flour works great for this recipe, but you can also use Cake Flour or Self-raising flour (just leave out the baking powder and baking soda for SR flour).  If using fresh raspberries - You can puree the raspberries first if you prefer, and then reduce them, it won't make a difference to the process.  If you do cook them first, make sure to add a small splash of water to the saucepan along with the raspberries and sugar.  If your Russian buttercream isn't thick and glossy, try one of these things;
If it is thin and soupy, the butter was probably too warm - place buttercream in the fridge for 10 minutes then try whipping up again.
If it has curdled - the butter was likely too cold - try heating the buttercream very gently over a bain-marie until it just starts to sweat, then whip up for 5 minutes and it should be saved.

What is Russian Buttercream?

Russian buttercream is a type of buttercream that uses sweetened condensed milk as a sweetener. This means there is no powdered sugar in the frosting like in American buttercream, and no granulated sugar like in a meringue buttercream. Its consistency is super smooth and glossy, it pipes like a dream and tastes delicious without being too sweet. It tastes like a cross between American Buttercream and Swiss Meringue Buttercream.

Does the raspberry flavor really come through?

Yes! Normally to get this much flavor you would need to use an artificial flavoring, but because we reduce the raspberry puree by cooking it, we are making a super concentrated puree that won't add too much liquid to your batter. That means the raspberry flavor comes through really beautifully.