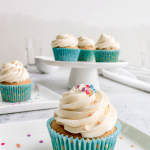 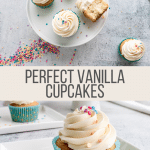 This is it folks, the recipe upon which I built my cupcake empire! I recently calculated that I have personally made close to a million of these cupcakes! I developed this recipe at the very beginning of my baking business and used it faithfully in every store and every kitchen we had. It never failed me - so you know it's a good recipe!

I love it because it's not too sweet, but it's just beautifully fluffy and crumbly in your mouth. It holds its own and doesn't break apart too easily and it gives a lovely rise with a flat top which is perfect for decorating. This cupcake recipe has been my secret weapon for over a decade - and now it's yours!

Should I use Margarine or Butter?

I have tried this recipe many times with both margarine and butter and I like the way it comes out better with margarine. This is totally down to personal preference so if you want to use butter instead, go right ahead! I find that the margarine is easier to aerate and makes for a better consistency in this particular recipe. I also find that since I will always be decorating these cupcakes with frosting, I don't want the sponge itself to be too rich, and the margarine helps with that. But it is totally your choice!

What kind of frosting to use

This is also down to personal preference. The usual topping for these would be a classic American Buttercream, that's what we always put on the vanilla cupcakes in the bakery, but there are so many options out there! My classic buttercream recipe has been tweaked to make it a little less sweet than a lot of other buttercream recipes which I found was way more popular and helps you to eat a lot more cake!

If you don't want to use a classic American buttercream, my current favourite is an Italian Meringue Buttercream, which is silky smooth and a much more sophisticated flavour than the super sweet traditional buttercream. It's a little more complex to make, but totally worth it in my opinion!

These vanilla cupcakes are honestly the perfect addition to your baking repertoire. I have taken them along to almost every party and social gathering I have been to over the past decade. Cupcakes are always a crowd pleaser and this recipe really shows off the best of that 'homemade' taste that you just can't get from a store.

This is also a super versatile cupcake recipe, it's a great base for making a myriad of different flavour combinations - I'll post some of my favourites in the next few weeks. 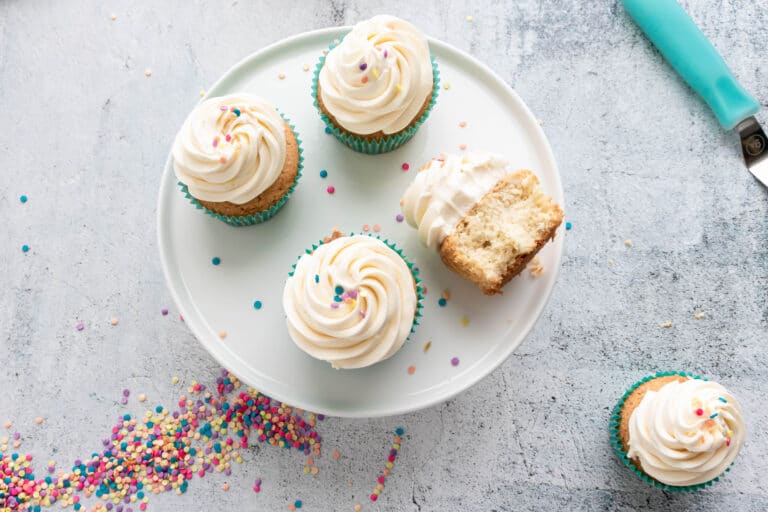 Tried this recipe?Show us! @bonni_bakery