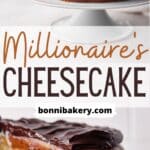 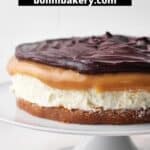 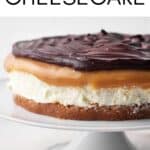 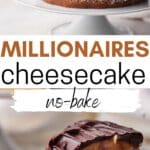 This Millionaire's Cheesecake is a fun twist on the classic Millionaire's Shortbread. No-bake vanilla cheesecake on a shortbread base, topped with gooey caramel and chocolate ganache.

Millionaire's Shortbread is a classic Scottish treat that is loved by many, so I figured - why not turn it into a cheesecake and make it EVEN better? The cheesecake layer in the middle really transforms this from a sweet snack to a truly indulgent dessert. (Cheesecake lovers, rejoice!)

For all my cheesecake lovers out there, this is definitely one to try. You may also enjoy my Baked Chocolate Cheesecake. Or if you're all about that caramel life, check out my Banoffee Pie recipe.

What is Millionaires Cheesecake?

I thought it would be fun to turn this classic Scottish treat into a cheesecake! The Millionaire's cheesecake consists of that same shortbread base, then a layer of creamy, no-bake cheesecake, a gooey caramel layer and is topped with chocolate ganache. The chocolate ganache made more sense than a set chocolate as it will be easier to cut through without smooshing the other ingredients.

Butter - We'll use this for both the caramel and the shortbread. It's best to use unsalted butter as we will be adding extra salt into each element individually.

Sugar - You want to use superfine white sugar so that it can easily dissolve into the cream cheese. (Caster sugar in the UK)

Flour - The flour is for the shortbread biscuit base, use all-purpose flour (plain flour).

Powdered Sugar - Also known as Icing sugar or confectioners sugar. This will help to thicken the cheesecake filling slightly.

Vanilla - Try to find a high-quality vanilla extract or vanilla bean paste. Avoid using vanilla essence if you can.

Whipping Cream - You can use heavy cream, whipping cream or double cream - basically any kind of cream with 32% fat or higher. Do not use half-and-half!

Light Brown Sugar - Also known as golden sugar. It's the soft, pale brown sugar that looks kind of like wet sand. This will help add to the caramel flavor.

Condensed Milk - Sweetened condensed milk will be the base for our caramel. Do not buy evaporated milk that comes in very similar cans!

Golden Syrup - In the UK we often use Golden Syrup in baking. It's hard to find in other parts of the world, but Golden Corn Syrup is a great substitute and is usually readily available.

How to Make the Shortbread Biscuit Base

The shortbread is the only baked element of this cheesecake, but it's super quick and easy. It's a nice change from the usual cheesecake base of crushed biscuits and butter and keeps the dessert more similar to the original caramel shortbread.

How to Make the No-Bake Cheesecake

How to Make the Gooey Caramel

How to Make the Chocolate Ganache

Traditionally for caramel shortcake you would pour melted chocolate over the caramel layer and let it set hard to create a 'snap' when you bite into it. Because the cheesecake is a soft base, it makes more sense to use a chocolate ganache topping so the cheesecake and caramel aren't squished when putting your fork into it. But you're not fussed about messy slices, by all means, do a solid chocolate layer instead - I'd just try to keep it on the thinner side.

How to Remove and Serve

As mentioned above, it is essential that you use a springform tin or loose-bottomed cake pan to make this cheesecake (or any cheesecake, really).

Millionaire's Cheesecake Bars - If you would prefer to make Millionaire's cheesecake bars instead of a round cheesecake, you can make the recipe exactly the same but into a 10-inch brownie pan or traybake pan instead.

Set Chocolate Top - As mentioned above, the traditional caramel shortcake has a set chocolate topping. I changed this to a ganache for the cheesecake to make it easier to eat, but you could replace the chocolate ganache with melted chocolate and let it set hard. Just make sure you. keep it a relatively thin layer so you can still get your fork through it!

Store the Millionaire's Cheesecake in the fridge in an airtight container. It will be good for 3 days. If you won't be eating it within 1 day, I recommend adding the extra chocolate barrier between the base and cheesecake to stop it from going soggy. (See 'shortbread base' section above and recipe notes). 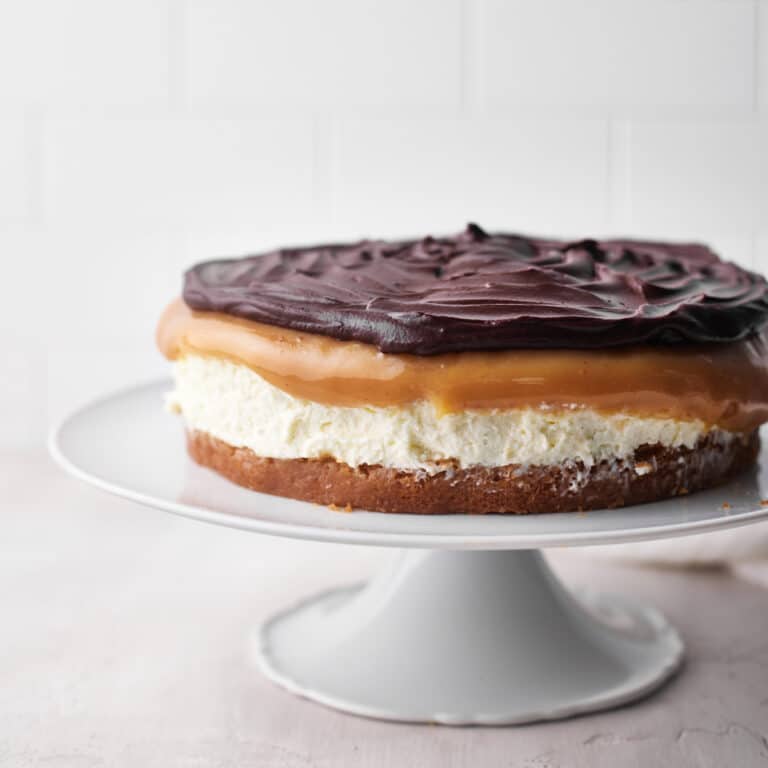 For the Shortbread Base

For the Chocolate Ganache

Make the Shortbread Base

If you don't intend to serve the cheesecake the next day, I recommend adding this extra step to make sure the base stays nice and crisp for longer:

Can I use Carnation Caramel instead of making my own caramel?

I do not recommend using carnation caramel in Millionaire's Cheesecake as it is a lot runnier than the caramel in this recipe and will likely not hold its shape.