I have to be honest, there are some kinds of cakes and desserts that I would be quite happy to never see again, having made them literally hundreds of thousands of times. But these cheesecake brownies, these will ALWAYS have a place in my heart and in my belly. This is my go-to treat when I want something decadent. My Ultimate Chocolate Brownies were always a huge hit in the bakery, but why have one delicious dessert when you could have two in one?! These cheesecake brownies are gooey and dense, the rich chocolate is balanced out with the tanginess of the cheesecake and there is just a hint of salt that gives it this beautifully rounded flavour that just swirls together in a dance of deliciousness in your mouth! 'But Jules, it's just a brownie', you say. Just wait until you have tried them for yourself!

Tips for the Brownie:

Tips for the Cheesecake:

How to slice Cheesecake Brownies:

If you a far a fan of an ooey, gooey brownie like I am, you might want to under-bake these just slightly. It's utterly delicious, but. quite hard to cut neatly! A lot of the. time when a recipe says 'cool before slicing' I will take it with a pinch of salt and dive in while they're still warm. This is NOT one of those recipes! These absolutely have to cool completely before you attempt to slice them, otherwise you're just going to end up with a sticky mess. The cheesecake and the brownies are both very soft once they are set, so when they are still slightly warm they will be runny inside. Make sure they are totally cool, maybe even slightly chilled before attempting to cut, then get a warm knife and press straight down.

On a traybake this size I would normally cut 9 brownies, but these are so rich that they are better enjoyed in smaller squares, so I cut them into 16 squares. It's up to you how to slice them though! 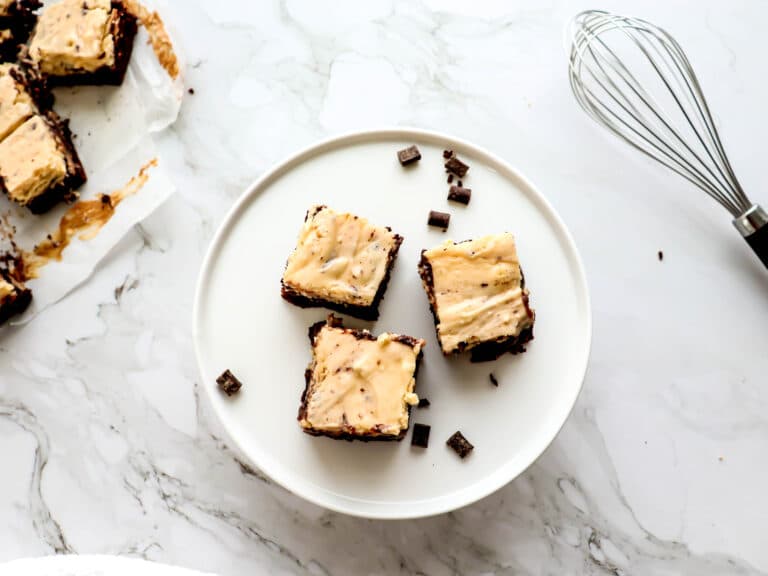