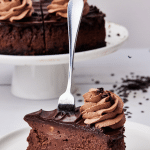 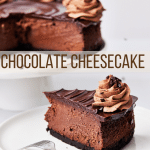 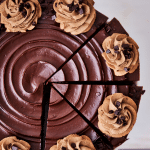 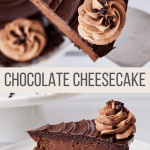 One of my all-time favourite desserts, this baked chocolate cheesecake recipe is rich, creamy and decadent. Most importantly, it will satisfy even the most intense of chocolate cravings! Thick and insanely chocolatey cheesecake, a crumbly oreo crust, a topping of chocolate ganache and finished off with chocolate whipped cream. I give you - a chocoholic's dream!

Chocolate cheesecake was actually the very first thing I ever baked entirely on my own. It was Nigella Lawson's chocolate cheesecake recipe and I remember it in detail. Baking late in the evening when I was maybe 14 years old, I remember finishing decorating it and standing back in awe at myself, so impressed that I had made something that actually looked really good. Straight away I ran upstairs with the cheesecake yelling 'Mum! Mum! Look what I made!" I was proud as punch, and that must have been when I was bitten by the baking bug! Who would have known at that moment that I would go on to start my own bakery?! All because of a well-turned-out chocolate cheesecake. Thank you Nigella!

What is special about THIS Chocolate Cheesecake?

While Nigella's cheesecake may have been the launching pad for my love of baking, I have baked many a cheesecake since then. There are so many amazing chocolate cheesecake recipes out there! This chocolate cheesecake though is a culmination of all things indulgent. I feel that this is not the kind of dessert where you want to cut corners, scrimp on ingredients or do anything but pull out all the stops! That's why every single element of this cheesecake has been crafted to complement and play off of each other.

You could just make the cheesecake and the oreo crust and it will still be ridiculously delicious. But the ganache just adds an extra layer of rich indulgence, and the chocolate whipped cream offers something a little lighter to almost cleanse your palette a little (but in a chocolatey way) so that each bite of cheesecake keeps tasting like the most chocolatey thing you've ever tasted.

I realize I sound like I'm about to break into song over a piece of cheesecake - but it's just THAT good. You'll just have to make it and see for yourself!

Even though this is a very special recipe, the ingredients for this chocolate cheesecake are pretty basic.

Cream Cheese - Of course you can't make a cheesecake without cream cheese. I used Philadelphia, but other brands will absolutely work, just make sure they are the thick kind of cream cheese, not too runny. Two 250g bricks of cream cheese work perfectly for this recipe.

Chocolate - As I mentioned above, you don't want to scrimp on ingredients for this recipe. You should absolutely use dark chocolate here, at least 70%. Using milk or semi-sweet just won't give the same indulgent taste. Even if you don't like dark chocolate, I recommend using it. The darkness is toned down substantially by all the creamy ingredients in the chocolate cheesecake.

Sugars - I used a blend of white sugar and golden sugar for a touch of interest, but you can substitute for all white sugar if you like here, it won't massively alter the recipe.

Eggs - You want to use large eggs here. I always use free-run eggs - a) because I don't believe in battery hens. We always used free-run eggs in the bakery, even when we were going through hundreds of eggs a day. And b) even if you don't care about the chickens, happier hens will always produce higher quality eggs. Your chocolate cheesecake will thank you.

Whipping Cream - or heavy cream or double cream, depending on where you are in the world. Fun tip for measuring cream - cream measurements read almost exactly the same for millimeters and grams. So if a recipe states 100ml, you can weigh out 100g and it will be nearly perfect, and vice versa.

Cocoa Powder - Although we have real chocolate in this chocolate cheesecake recipe, the cocoa powder just gives it that punch of extra chocolate flavour.

Oreo Crumbs - An oreo crust works wonderfully with this cheesecake. You can either buy pre-crushed oreo crumbs, or you can just buy a packet of Oreos and bash them to bits in a bag with a rolling pin. You could also use a food processor, but I feel that the bag bashing is way more fun...

How to Make Chocolate Cheesecake

Some tips for making the very best chocolate cheesecake:

Do I need to use a water bath for Chocolate Cheesecake?

Whether or not you need to use water bath is entirely up to the result you want to achieve. For the best results I highly recommend always using a water bath when baking cheesecakes, it will give that smooth, silky, creamy texture that you want from the best cheesecake recipes. However, if you really can't be bothered, this chocolate cheesecake will still be delicious without the water bath, it just won't look quite as 'finished' and may have a couple of cracks along the top. If you plan to cover it in chocolate ganache like I did, the cracks don't really matter, but the texture will likely be a little more 'crumbly' than silky. So if you want the best chocolate cheesecake, use a water bath.

How to know when a baked cheesecake is done

Knowing when a baked cheesecake is done and ready to come out of the oven is an important skill in any keen baker's repertoire. Take it out too soon and your cheesecake won't set but take it out too late and the cheesecake will be crumbly and dry. Just relying on recipe bake times isn't always accurate, as it depends on a number of factors such as the heat distribution of your oven, how big your cake pan is, how. much of the cheesecake batter you couldn't resist eating while preparing it... Any number of things can alter the bake time, so it's important to be able to know when to take baked cheesecakes out of the oven.

The key thing to look for is that the cheesecake will be 'set' (as in not liquid anymore) but will still be jiggly in the centre, and so may LOOK underbaked - when in actual fact it's ready. This is the big mistake a lot of people make, they think it needs longer and they leave it in until the middle stops jiggling. The thing is, the cheesecake will continue to bake after you remove it from the oven, and then this will set further as it cools and then firm up even more as it chills.

If you think it may be ready, give it a little wobble. The edges of the cheesecake should be fairly still, but the middle will still jiggle around. If it's at that stage, you can also very gently touch the centre of the cheesecake to make sure it's not liquid. If a light touch doesn't leave anything on your finger, it's probably ready - take it out!

How to decorate Chocolate Cheesecake

As I mentioned above, this chocolate cheesecake is great on it's own, you don't need to add any of the fancy stuff on top, but by god is it worth it! But there are a number of things you can do.

If you want to decorate exactly as I did:
Make your chocolate ganache and wait until it has been cooling for about 30 minutes, it should be fairly stiff but still 'liquid'. Think like the consistency of really thick custard. Basically, the goal is that you can smooth it over your cake, but it isn't going to run down the edges. To test it, run your spatula across the middle of the bowl to make a parting, if it takes a second to fill back in - it's ready!

I dolloped the ganache right on top of my chocolate cheesecake and smoothed it out with a small spatula. Then once it was all smooth, I start spinning the plate around while holding the very edge of my spatula at an angle to the ganache, making a small dent and moving out slowly to create the spiral effect.

I then piped the chocolate whipped cream rosettes around the outside, roughly where I knew my slices would be and sprinkled with little chocolate flakes. A simple method with a really professional result.

It's no secret that we love chocolate here at Bonni Bakery. In fact, most of the time when I'm deciding what to bake I have to remind myself that not EVERY recipe can be chocolate! We have a lot of great chocolate recipes for baking chocolate goods, such as my Ultimate Chocolate Brownies and my Molten Chocolate Lava Cakes (one of the most popular recipes on the blog!).

So with that love of chocolate, you can take me very seriously when I say THIS chocolate cheesecake recipe is the dessert for any chocoholic! 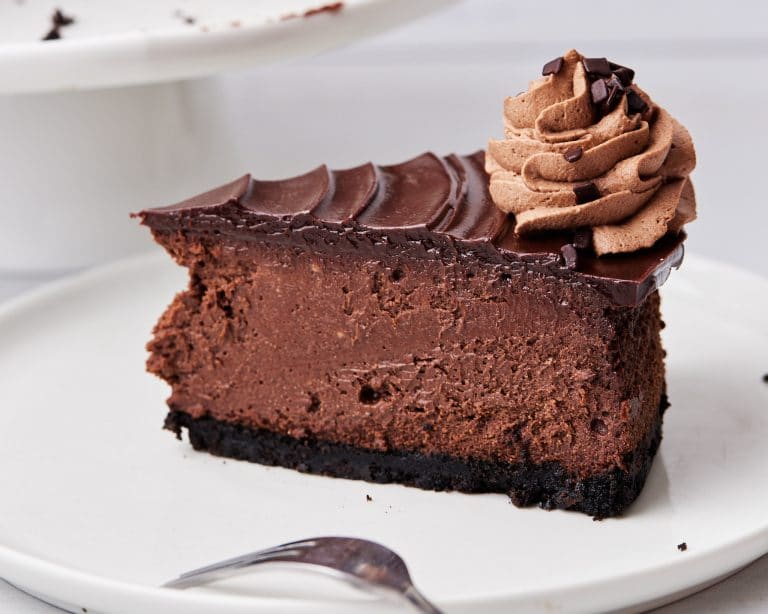 For the crumb base

For the Chocolate Cheesecake

For the Chocolate Ganache

For the Chocolate Whipped Cream

Make the crumb base