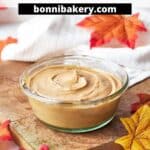 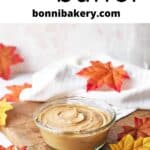 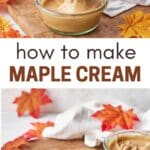 It can be a bit of a labor of love - so why make maple cream? Well, if you love that wonderful, sweet maple flavor but are frustrated that you can only really drizzle or soak things with maple syrup - maple butter is your answer! It's thick and spreadable like peanut butter, but with that classic maple taste, so you can spread it on toast or waffles, or even just lick it off the spoon.

If you are enough of a maple fiend to want to make your own homemade maple cream, you'll probably enjoy my Maple Pecan Bundt Cake recipe or my Pumpkin Spice Donuts with Maple Cream Cheese Glaze. For more new spreadable flavors, you might also want to check out my Sweet Pecan Butter.

What is Maple Cream?

Maple cream is a thickened, crystalized version of maple syrup which means it is spreadable and has a peanut butter-like consistency, but with all the sweetness and flavor of maple syrup. It is traditionally made with just one ingredient - maple syrup.

The best way to describe maple cream is as spreadable maple syrup - because that's exactly what it is! Living in Canada for a few years, I saw maple butter on a regular basis in grocery stores and those touristy shops with the giant moose outside. But it never occurred to me to look into what it's made of or the process behind making your own maple cream. Turns out, maple cream is literally just made from pure maple syrup - that's it! The difference in consistency is achieved through crystalization in what is, on close inspection, a very scientific process, but in practice really just means heating and stirring.

Maple Syrup - Yes there really is only one ingredient! Make sure it is real maple syrup and high quality. It should be pure maple syrup, so no other additives or extra things added. Also, I prefer the results with lighter maple syrup, rather than dark syrup. Some people harvest their own maple syrup which is really cool - but it's absolutely not necessary to make great maple cream. The store-bought syrup is fine, as long as it's the real thing.

How to Make Maple Cream

Okay, while this may be a simple recipe, I'm not going to lie to you and say this process is quick and easy. It does require a bit of time and attention - but the results are so worth it! There is limited information out there on how to do this properly, and it took me a few tries to get it right. But I'm sharing everything I learned in that process so hopefully, you will have wonderful homemade maple cream first time!

Can you Make Maple Cream with a Stand Mixer?

Technically yes. But I want to preface this with a warning that unless you have a very powerful, durable mixer, I wouldn't advise it. The first time I made maple cream I did it entirely in the stand mixer and my Kitchenaid's motor nearly burned out - it's currently still making funny noises whenever I use it. So I don't recommend doing this purely in the stand mixer.

That being said, it is a lot of work for one person to do by hand, so I recommend either swapping out with a second person or try splitting the load with your mixer. I found the best way is to let my mixer stir for the first 15 minutes, then I took over when it started to get thicker and harder to stir. This way you don't have to do it all by hand but you protect your mixer's motor.

If you do use your stand mixer, make sure you use the paddle attachment and put the mixer on the lowest setting. Check your mixer regularly, if it seems like it is struggling or starts to get warm, turn it off and take over the mixing by hand.

Ways to Use Maple Cream

As a breakfast spread - Of course, maple syrup is classically used in breakfasts! Now you can have a lovely maple cream spread to smear onto your toast, waffles, pancakes, or french toast. It's also lovely on warm biscuits or English muffins - as they balance out the sweetness a bit.

In Ice cream - Sweet on sweet isn't always good, but if you took just a little of this maple cream and swirled it into some ice cream, it takes it to the next level and gives a boring ice cream a whole new life.

As a dip - Because it is the consistency of a spreadable cream, maple butter makes for a really lovely dip for fruit. Try some apple slices dunked into the maple cream! (Green apples are probably best as they are quite tart and would balance out the sweetness).

In savory dishes - Maple cream is very sweet, but I think a tiny bit of sweetness can really compliment a savory dish. Try spreading a very small amount of maple cream onto your bread before making a grilled cheese with bacon - I think this is definitely a winning combination. The sweetness with the saltiness of the bacon would just be sublime!

If you've been stirring and stirring and your maple cream just won't get thick, it's probably because it didn't get hot enough to break down the right crystals. This isn't your fault, as maple syrup is a natural product, the sugar levels are not carefully controlled, so it could be that the sugar levels are slightly higher or lower in one batch of maple syrup to the next, meaning you have to heat it to a slightly higher temperature. Don't worry, your syrup won't' be wasted - just put the same batch back in the saucepan and start again - this time heating to 3 or 4 degrees higher than the last time.

Maple cream is too thick or crystallized

If the maple syrup is too thick to stir or has chunks of crystals in it, it likely got a little too hot and you're going to end up with maple candies. Just add the maple syrup back into the pot with a few tablespoons of water and start again, this time heating to 3 or 4 degrees less than last time.

Note: If you're really having trouble getting the small crystals to form, you can try adding 1-2 tablespoons of powdered sugar to the maple syrup when heating - this will encourage the growth of the smaller crystals. However, this will then technically not be 'pure maple cream' as that is traditionally made with just maple syrup. 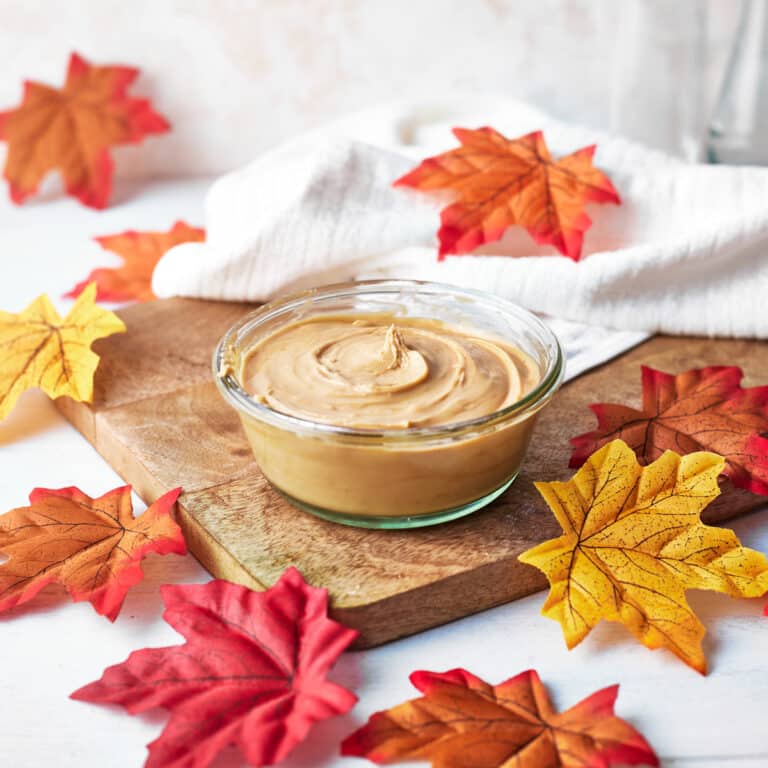 Make sure to use pure maple syrup. Also, the lighter-colored syrups give the best results.  If your maple cream doesn't thicken or crystalizes too much - see the 'troubleshooting' section in the blog post above for how to fix it.
Keyword maple syrup
Tried this recipe?Show us! @bonni_bakery