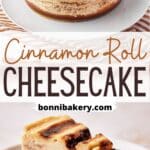 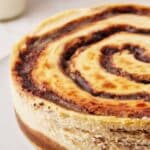 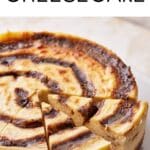 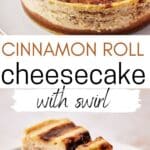 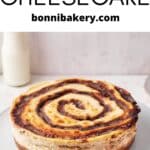 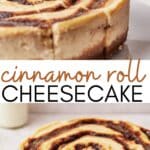 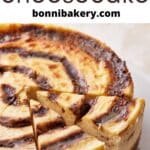 This Cinnamon Roll Cheesecake is a wonderfully creamy cheesecake with a pretty cinnamon swirl baked into it! It really is a cinnamon roll in cheesecake form!

If you're a fan of cinnamon rolls and a cheesecake lover, this is about to become one of your new favorite desserts! Never again will you have to choose between a homemade cinnamon roll and a slice of cinnamon cheesecake.

One of our most popular muffin recipes in the bakery used to be our Cinnamon Roll Muffins, which is what gave me the inspiration to try this cheesecake. I used the same cheesecake filling as my Salted Caramel Cheesecake, created a brand new crunchy cinnamon base, and added the swirl filling to make the perfect cinnamon roll cheesecake!

Why You'll Love this Recipe

Note: Make sure your cream cheese, heavy cream and eggs are all at room temperature before beginning to make this cinnamon roll cheesecake.

This crunchy cinnamon base is an adaptation of a classic graham cracker crust. Just a few extra ingredients really make this a delicious base for your cheesecake!

I am usually a big fan of putting flourishes and finishing touches on my cakes and desserts, and my go-to is a nice piped rosette around the outer border. But I honestly don't feel this cinnamon roll cheesecake needs any further decoration since the decoration is baked into the cheesecake itself. If you do want to go one step further though, here are a few ideas:

Mini Cinnamon Rolls - I've seen a few other bloggers who have 'Cinnamon Roll Cheesecake' recipes, they don't have the swirl in their cheesecake, but they have decorated with little mini cinnamon rolls on top of the cheesecake, which is also super cute. (I think you can get these from Cinnabon).

Glaze - Of course, a signature part of a cinnamon roll is the sticky glaze on top. I didn't add one to this recipe as I didn't want to mask the pretty swirl, and frankly, I didn't think it needed it, flavor-wise. But if you want to add a glaze, just mix up some powdered sugar and a little dash of milk and vanilla and pour or drizzle on top of the cheesecake.

Do You Have To Use A Water Bath?

The short answer is no, it's your cheesecake and you can do whatever you want with it. But for the absolute best results, I strongly recommend making a water bath to bake your cheesecake. This is a real showstopping cheesecake that may be made for a special occasion or to really impress someone - it would be a shame if the gorgeous cinnamon roll swirl on top was ruined by a big crack.

The water bath not only helps to prevent cracks, but it makes this the smoothest, creamiest cheesecake you have ever eaten. It is an extra step on what is a relatively easy recipe, but I promise you the water bath is worth it and will help to make this cinnamon roll cheesecake one of your new go-to dessert recipes.

Sour cream - You can sub the heavy whipping cream for the same quantity of sour cream. The cheesecake will have a bit more of a tangy flavor.

Brown Sugar - The recipe calls for both light brown sugar( in the crust) and dark brown sugar (in the cinnamon swirl), you can substitute either for the other. Note though that the dark brown sugar does provide a darker, more striking result on the swirl.

Biscoff Base - This cheesecake is also really delicious with a Biscoff cookie base. Just replace the graham crackers with Biscoff cookies and omit the cinnamon.

Cheesecake Bars - For something a little different, make this recipe in a square or rectangular pan and pipe lots of little swirls on top to make cinnamon roll cheesecake bars. 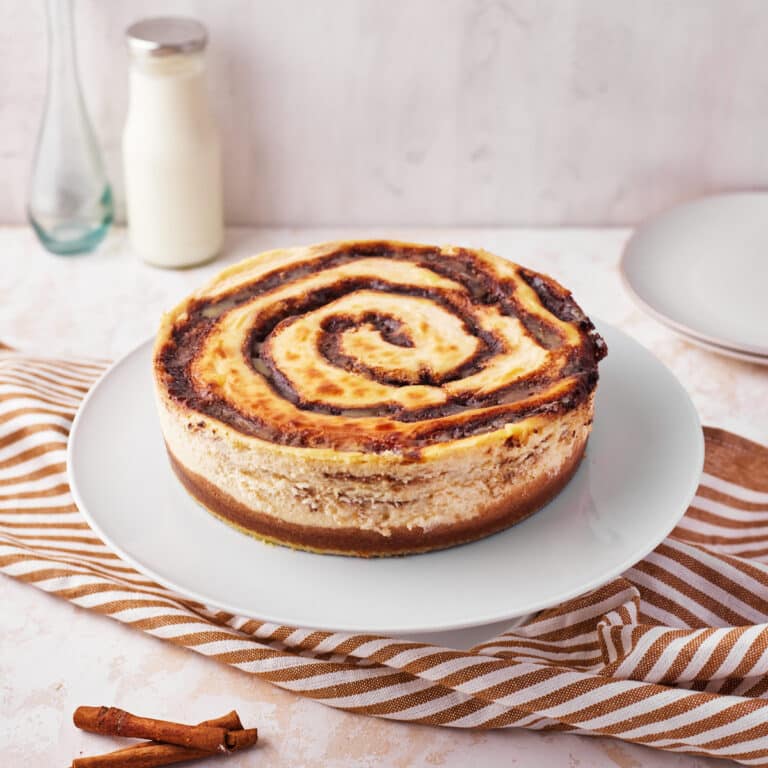 For the Cinnamon Base

For the Cinnamon Swirl

The water bath seems like an extra fiddly step to take, but it will ensure you have a wonderfully creamy cheesecake with no cracks. It's well worth it to take the extra step, and it will really up your cheesecake game!  When putting the swirl on the cake, it is definitely easiest to use a piping back for maximum control.  If you don't have a piping bag, you can just use a Ziploc bag and cut a hole in the corner.