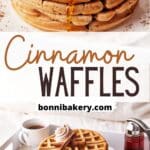 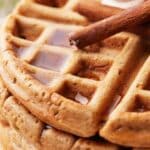 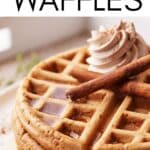 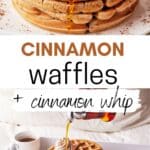 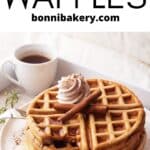 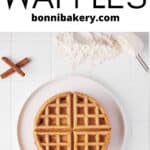 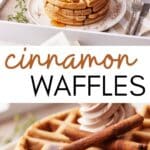 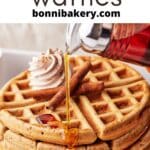 Warm and fluffy cinnamon waffles topped with delicious cinnamon whipped cream - the perfect breakfast for this time of year!

If you love the smell of cinnamon rolls in the morning, you're bound to enjoy a stack of freshly made cinnamon waffles with a dollop of homemade whipped cream on top. Cover them in maple syrup and take a bite out of this perfect fall weekend breakfast.

While I've been using cinnamon in a lot of recipes this fall, such as in my Chai Cake or my Pumpkin Cheesecake Cookies, in this recipe, the cinnamon really is the star of the show. With cinnamon included in both the delicious waffles and the cinnamon whipped cream, that warm flavor hits you like a big, fall-time hug!

How to Make the Cinnamon Waffles

This is one of the easiest waffle recipes you will ever make, it's super quick and easy.

How to Make the Cinnamon Whipped Cream

I recommend making the cinnamon whipped cream before you start making your waffles so you can serve them right away while they are still hot. You can make the whipped cream ahead of time and just store it in the fridge until ready to eat.

There is often some confusion about what exactly constitutes a 'Belgian' waffle. A traditional Belgian waffle is made with a yeast batter with little sugar crystals on top, it is much more dense and thick. They are utterly delicious but very different from what is often considered a 'Belgian waffle' outside of Europe.

In North America, the term 'Belgian waffle' usually refers to the shape of the waffle, which is the kind that has big deep pockets, rather than small, shallow ones found on American waffles. The batter for these two kinds of waffles though are similar and produce a light, fluffy waffle.

The waffles I made for this post are the 'American' version of a Belgian waffle (confusing, I know).

Apple Cinnamon Waffles - To add another fantastic fall flavor to your new favorite breakfast, serve with some cinnamon apples for a bit of bite and fruity flavor.

Churro Waffles - Try mixing together some white sugar and cinnamon to make a cinnamon sugar to sprinkle on top of the waffles for even more cinnamon flavor - the cinnamon sugar waffle tastes just like churros!

Fresh Fruit - The warmth of the cinnamon can be really nicely balanced with some fresh berries. They also go beautifully with the cinnamon whipped cream.

Cream Cheese Glaze - These cinnamon waffles would be absolutely to-die-for with a cream cheese glaze drizzled on top.

I strongly recommend eating these waffles right away, but if you want to keep them for later, wrap them tightly in aluminum foil and store them in an airtight container at room temperature.

When you are ready to re-heat them, I recommend you to cook waffles in the oven or a toaster oven, rather than the microwave, as the microwave may make them soggy.

This delicious waffle recipe is the perfect way to start your weekend morning this fall. Cinnamon waffles are THE best waffles to help welcome in that colder weather, and they are so quick and easy to make! 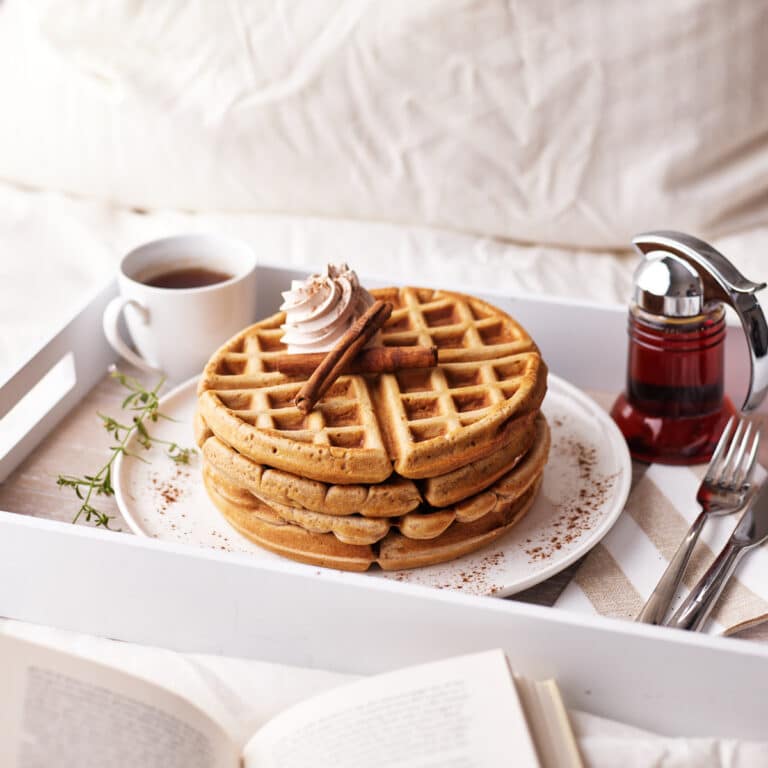 For the Cinnamon Waffles

For the Cinnamon Whipped Cream

Make sure you make the cinnamon whipped cream before you start the waffles so you can serve them together while the waffles are still hot.  For a little more heat, you could add ½ teaspoon of ginger and/or nutmeg to the waffle batter as well for a more festive flavor.