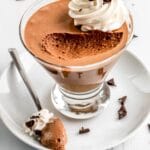 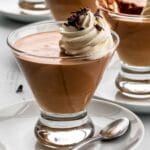 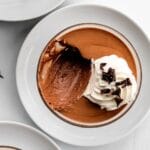 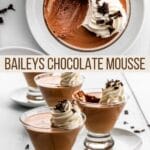 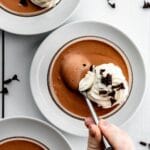 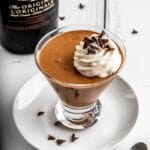 There's nothing more luxurious than a classic French chocolate mousse. Except maybe Baileys chocolate mousse! This Baileys Chocolate Mousse is rich, silky, chocolatey, and has a nice hard kick of that unmistakable Baileys flavour.

This is a great recipe to make for dinner parties because you prepare it ahead of time and let it chill in the fridge while you prepare all your other food. It's also an impressive dessert that is deceptively easy to make. The use of Baileys Irish cream makes it a great dessert around st. patrick’s day. It's also the perfect dessert for a special occasion or around the holiday period when you're looking for a celebratory and boozy dessert!

There are plenty of recipes on this site that are chocolatey, such as my Molten Chocolate Lava Cakes, and boozy such as my Tiramisu Cake with Amaretto, but this easy Baileys Chocolate Mousse recipe is BOTH!

As a classic dessert really only uses a handful of ingredients to make the classic chocolate mousse base, then the addition of bailey’s irish cream liqueur to take it to the next level.

This bailey’s chocolate mousse recipe is super easy to make - I promise you! People are often intimidated by mousse because they think it's a complicated or difficult thing to make - but it's really not! There are a few different steps involved but there is nothing tricky in the recipe - just take it follow the step-by-step instructions and you'll be on your way to chocolate mousse glory. The hardest part about this recipe is not drinking all the Baileys before it goes into the chocolate!

I also find it a really relaxing recipe to make - it's a good de-stressor and there's nothing more satisfying than stirring that chocolate mix together.

Note: If you are concerned about using raw eggs, see my section below about how to adjust the recipe to cook them out.

What about the raw eggs?

There are raw eggs in this baileys chocolate mousse recipe but if you are using good quality eggs it really shouldn't be an issue. Most supermarkets these days will only sell pasteurized eggs, which means the risk has been removed. You can check with the supermarket or manufacturer. But if you are still worried you can either use carton egg whites (which are always pasteurized) or make a small tweak to the recipe to cook the eggs.

All you would do differently is make a sugar syrup by boiling the sugar in a saucepan with ⅓ cup of water until it reaches 240°F, and then slowly dribble the syrup into the whipped egg whites, while whisking them in your mixer. This is making an Italian meringue rather than a French meringue, and it means the heat from the sugar syrup will cook the egg whites as it incorporates. For more info on this, see my Italian Meringue Buttercream post.

I made this Baileys chocolate mousse last night after three failed attempts at a cookie recipe that just wasn't doing what I wanted it to. That's the part of recipe development that you don't see - all the failures and messes! I was utterly exasperated and in a bad mood, I was going to call it quits for the night and I reached for a glass of Baileys, then I thought to make this instead. I knew that chocolate mousse is reliable and always delicious and let's be honest - I needed a win!

There's a quote in one of my favorite movies, Julie & Julia that says:

"You know what I love about cooking? I love that after a day when nothing is sure and when I say nothing, I mean nothing. You can come home and absolutely know that if you add egg yolks to chocolate and sugar and milk, it will get thick".

That always sticks in my head when I make chocolate mousse because I know I can count on it to turn out beautifully. And adding the fact it's a Baileys Chocolate Mousse just makes it extra fun!

Does it have to be Baileys?

Definitely not, you can use any Irish Cream you like in this recipe. Or even another alcohol if you like. Also, you can adjust the amount of Baileys you include in the recipe depending on how much of a kick you want. This recipe calls for ½ cup of Baileys which gives it a good, strong flavour, but if you want more of a subtle hint, cut this back to ¼ cup and replace with an extra ¼ cup whipping cream. You could also leave the alcohol out entirely and just substitute it with more cream.

This Bailey's chocolate mousse is simply nothing short of divine. The gorgeous silky, creamy texture and plenty of chocolate flavor make it a winner every time in my book. Many chocolate mousse recipes are lacklustre or a little disappointing, but if you are a chocolate lover, this will for sure be your new favourite recipe! 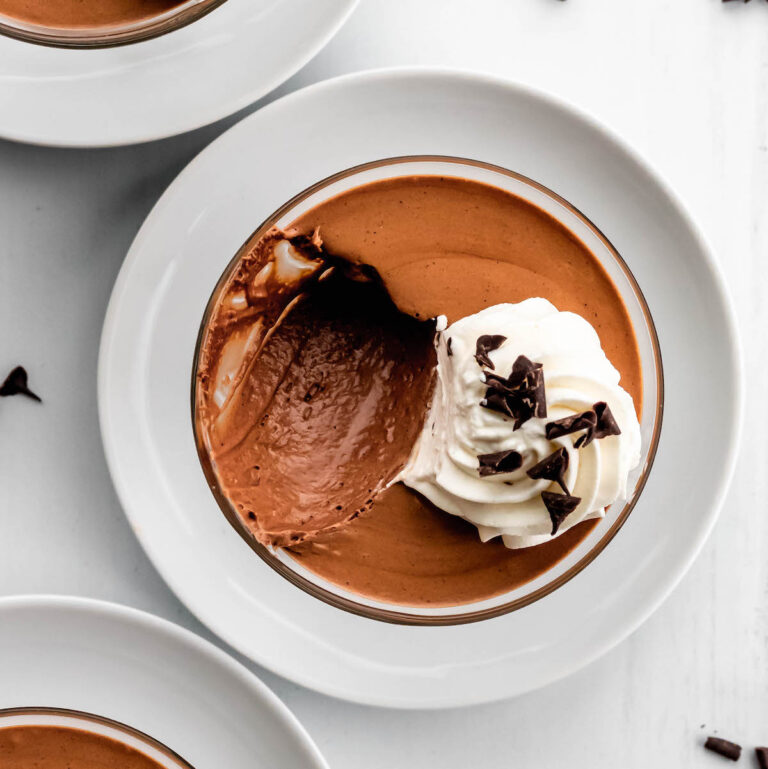