You know anything with the words 'Nutella stuffed' in the title is gonna be good! And these Nutella Stuffed Banana Muffins definitely do not disappoint! Hearty banana muffins filled with a generous stuffing of Nutella which just coats your tongue with that chocolate-hazelnut deliciousness. And if you haven't tried it before, let me tell you - banana and Nutella is a match made in heaven!

I'll be honest, this recipe came about because I realized it was World Nutella Day the next day and I had some very browned bananas that needed to be used - but what a happy series of events that lead to this beautiful concoction! Nutella is admittedly not something I eat often or generally have lying around the house, but after making these Nutella stuffed banana muffins, I may just starting using it in more bakes!

I actually made two batches of these before I was happy with how they turned out. The first time I piped the Nutella in swirls on top of the muffins, but it didn't sink into the muffin during the bake as I expected it to and they kind of just looked like thin brown worms on top of the muffins after - not the look I wanted! The second batch looked way better, instead of piping, I put a small blob of Nutella on top of the muffins (about the size of an almond) and then used a toothpick to swirl it into the batter - much better results!

In terms of making the actual muffin batter, it's pretty straightforward, it's almost a 'chuck everything together in the bowl and mix' recipe, just starting with the eggs and sugar first to give them a head start. It's actually the same batter used for my Cinnamon Swirl Muffins. I filled the muffin cases up about half way using an ice cream scoop and then dolloped about a teaspoon of Nutella in the middle before filling them up the rest of the way and adding the swirl to the top.

If you have no other reason for making Nutella Stuffed Banana Muffins, let it be the SMELL that goes through your home when these are baking! Oh my god it was glorious. You'll know they are ready when the tops are golden brown and a skewer inserted comes out clean - just make sure to avoid the Nutella when you test! 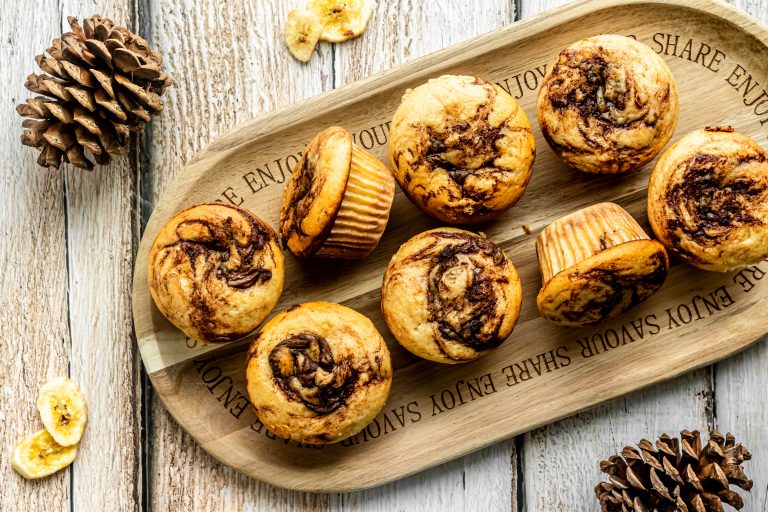