I LOVE cannoli. They are one of my all-time favorite treats. But they are hard to find and can be pricey, so I decided to make my own! And let's face it, everything is better homemade. The classic ricotta filling with chocolate chips is amazing, and I make that in my Air Fryer Cannoli recipe. The traditional cannoli filling is a classic for a reason - it's delicious, creamy, and the perfect complement to the cannoli shells. But I wanted to do something extra special for these cannoli, so I made a pistachio filling.

If you've been following this blog for a while, you may know already that I'm a little pistachio mad and try to put them in everything - check out my Pistachio Cupcakes recipe. I just think pistachios have such a deep, complicated flavor that goes well with sweet and savory and, in my opinion, makes everything better. And these pistachio cannoli are no exception.

Making your own shells might seem daunting, but it's easy if you follow this simple step-by-step process. I used to be super intimidated by the idea of deep-frying in my own kitchen, but after trying it for the first time I realized it's actually super easy and fun! Now I deep fry all the time, recipes like my Custard Donuts which are so amazing when fried and homemade! However, if you're still not sure about deep frying you can make my Air Fryer cannoli shells instead and still add the sweet pistachio cream.

Flour - Use All-purpose flour (plain flour) to make these cannoli shells, this has the right strength and structure to make a solid shell.

Sugar - There isn't much sugar in the shells but a small amount of white sugar helps tie the flavor of the shell in with the sweet filling.

Butter - You can use salted or unsalted butter for this. Make sure it is at room temperature before you begin.

Egg - We'll use egg in the cannoli shells and also a little extra for an egg wash to hold the shells together on the cannoli tubes. In baking, I always recommend using large eggs and always free range if you can.

Marsala Wine - Traditional Sicilian cannoli recipes use Marsala wine in the shells, but if you can't find it you can substitute it with a little red wine, dry white wine, or red wine vinegar.

Ricotta - You want to strain your ricotta the night before making your cannoli filling, there's a whole section below on how to do this.

Powdered Sugar - Also known as icing sugar or confectioners’ sugar, this is the super fine, powdery sugar that will dissolve into your ricotta cheese and add just the right amount of sweetness.

Vanilla - Vanilla adds sweetness and depth of flavor to our cannoli filling. Make sure to use a high-quality vanilla extract or vanilla bean paste. Try to avoid vanilla essence.

Cinnamon - The cinnamon is optional but it does really add something to the filling, it's not enough to be able to detect a cinnamon flavor, but it's just a slight note of warmth in the filling. I think it's worth adding.

Pistachio Paste - Also known as pistachio butter. You should be able to find this in a specialty foods store or online. Or you could also make your own. Just make sure the ingredients say 100% pistachios and not a bunch of other filler ingredients.

How to Make the Cannoli Shells

How to Make the Pistachio Cannoli Filling

Note: Make sure your ricotta was strained overnight before making this filling.

How to Fill Cannoli

How to Strain Fresh Ricotta

It's important to strain the ricotta overnight to remove any excess liquid that might be in there. If you don't then that liquid will seep out into your cannoli shells and make them soggy.

Can You Make Cannoli in an Air Fryer?

Yes, you can! I will say that the texture of the cannoli is a little different when made in the air fryer, and they of course won't have those famous cannoli bubbles all over the shell, but they are still crispy and delicious.

Check out my post here about how to make Air Fryer Cannoli.

Cannoli Tubes - In order to shape the cannoli shells, you will need cannoli tubes. Mine were gifted to me years ago by one of my employees in the bakery when she came back from visiting home in Italy, but you can easily find them online or in specialty cooking stores. There aren't many substitutions for real cannoli tubes as it's not just about the shape, it's the material, weight, and seam that are specifically formed to withstand the hot oil and cook the cannoli shells perfectly. They're fairly inexpensive and will last for all your future cannoli needs.

Thermometer - It's important for the oil to be at the right temperature at all times. If it's too hot your cannoli shells will burn, if it's not hot enough the cannoli shells won't crisp up properly. You should use a thermometer to monitor the temperature and turn it up or down to keep it at a steady 350°F throughout the cooking process (give or take 10 degrees). Make sure you use a thermometer that is built to withstand that kind of eat, many thermometers are meant for lower temps and will not function properly or may even break if inserted into hot oil. I used an infrared digital thermometer.

Saucepan - Obviously you'll need something to fry your cannoli in. You want a saucepan that is wide enough that the cannoli won't be crowded, but not so huge that you'll need liters and liters of oil to fill it up. You need at least 3 inches of oil in the pan to make sure the cannoli can cook properly, so take this into consideration when choosing your pan.

There are so many fun variations possible with this pistachio cannoli recipe.

Chocolate Dip - try dipping the ends of each cannoli shell in melted chocolate before you fill them with the pistachio filling for an extra touch of luxury.

Swap out the filling - If you leave the pistachio out of the filling, you will have a regular ricotta cannoli filling. Mix it with chocolate chips and fill with that instead for a classic cannoli.

Cocoa Powder - Add 1 tablespoon of cocoa powder to the cannoli shell recipe for a chocolate boost and darker color.

Zesty touch - Grate some orange zest into the pistachio filling for a citrusy kick.

Nutella Filling - Try replacing the pistachio paste with Nutella for a chocolatey, nutty filling instead.

Ricotta Cheese - If you can't find or don't like ricotta cheese, you can swap it out for mascarpone. You can use it in the same quantity as the ricotta. Or you could use a mixture of ricotta and mascarpone. The mascarpone should still be strained just as the ricotta.

Marsala Wine - You can substitute the Marsala wine for red or white wine, sherry, or red wine vinegar.

Once the cannoli have been filled they should be enjoyed right away. After a few hours of sitting with filling in them, the cannoli shells will start to go soggy.

For best results, store the shells and filling separately and fill right before serving.

The cannoli shells can be prepared up to a week in advance and stored in an airtight container at room temperature.

The filling can be prepared 3 days in advance and stored in an airtight container in the fridge. 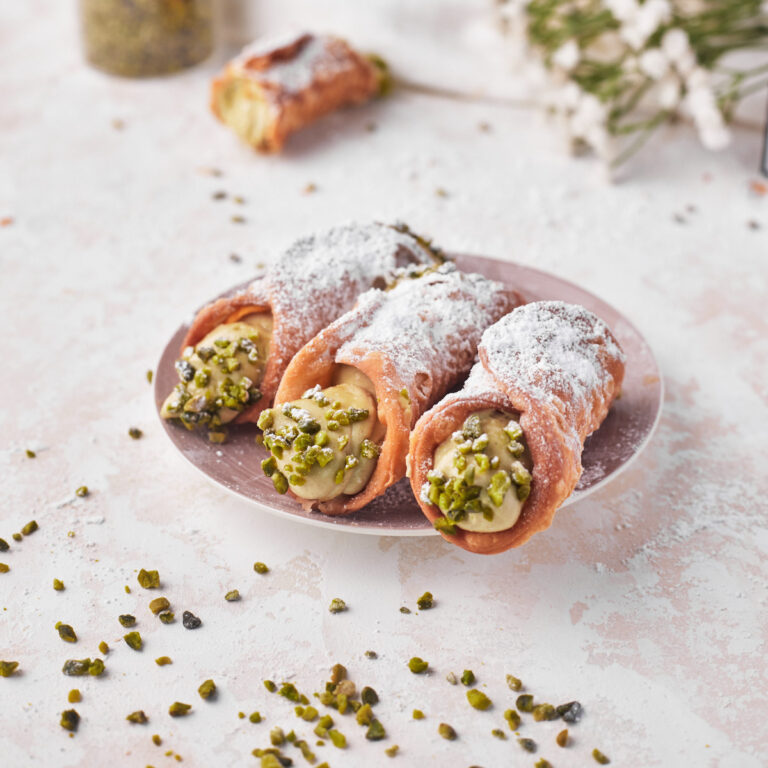 For the Cannoli Shells

For the Pistachio Cannoli Filling

*To strain the ricotta, wrap it in a cheesecloth and place it in a sieve over a large bowl. Place a plate with something heavy on top of it onto the wrapped ricotta to force the excess liquid out.  Put it in the fridge like this and leave it overnight.   **If you want to prepare the cannoli dough in advance, you can make it the day before and leave it in the fridge overnight.  Just bring it back down to room temperature before rolling it out.  I have tested making this dough up to two days in advance and it still works great.